Golden Teacher Mushroom: Everything You Need to Know

Hello everyone! Hope you guys are doing good. Today, in this article you will have a closer look at the golden teacher mushroom. I will try my level best to provide you everything you need to know about this topic.

This article will focus on what exactly golden teacher mushrooms are, their background, where they come from, how do they look like, their characteristics, how can you grow them, and more details on many similar features.

What Exactly Golden Teacher Mushroom Is?

Both Cultivators and Psychonauts love golden teacher mushrooms because of the fact that they grow quickly and their psychedelic journey have a profound impact respectively.

Psilocybe cubensis species is very easy to cultivate in the home setting and is widely distributed. This is the reason this species is among the well-known psilocybin mushrooms.

In 1906, this species was described for the very first time by Franklin in Cuba as Stropharia cubensis. Almost one year later, Narcisse Theophile identified it as Naematoloma in Tonkin.

Whereas, in 1941, it was named Stropharia cyanescens in Florida by William Alphonso Murrill. After that in the middle of the 1980’s, it was given the name Psilocybe cubensis.

This information spread around quickly because of their look like a yellow cap. They are elegant and quite large in comparison to the other types of psilocybe cubensis.

Psilocybe is derived from the Greek word Psilos that means a thing with a bare head whereas Cubensis meaning is coming directly from Cuba. Some strains of psilocybe cubensis are commonly known as penis envy due to their shape.

Where Do Golden Teacher Mushroom Come From?

It is among one of the most popular psychedelic fungi loved by growers and shroomers at the same time. There are various facts about golden teacher mushrooms that play a key role in their popularity.

Psilocybe cubensis strain is considered as so special by the cultivators due to the fact they have an air of mystery. The exact origin of golden teacher mushrooms is still unknown but they are highly recognizable.

Golden teacher shrooms consist of a fruiting structure having a partially covered cap with a golden or yellowish colored center. This cap is elegant and larger as compared to any other type of psilocybe cubensis.

Their cap size can be reached up to 8 centimeters in diameter. Their structure has a hollow stipe that is quite thicker towards a base. Golden teachers also have gills and they may vary between white and purplish brown. 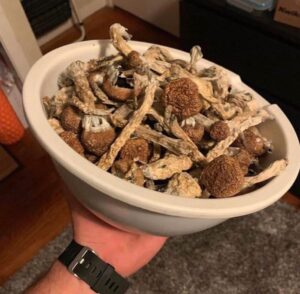 A recommended dosage for dried golden teacher mushroom is ranged between 1 gram and 2.5 grams. This amount of dose could be small for regular and experienced shroomers but it allows a margin of error for new people who have never used these fungi.

If you are still worried about the dosage, you can use EROWID’s mushroom dosage calculator.

You will get a medium-sized golden teacher mushroom from the first flush but later it becomes flatter as well as larger in comparison to earlier. Their caps become pretty plain when GTs grow to the fullest.

They are less fruiting compared to other Psilocybe cubensis but the good news is they can easily grow even under optimal conditions required for their growth. Just because of this fact, they are more popular and like by new cultivators and growers.

How Can You Grow Golden Teacher Mushroom at Home?

I have mentioned two different techniques which you can adopt to grow golden teacher mushrooms at your home.

You can use the golden teacher shrooms grow kit. It is the best method for growers who want quick results. While using these grow kits, you must be familiar with these instructions. Famous mushrooms dealer Magic Mushroom Shop offers two different types of grow kits as given below.

The second technique is to use golden teacher spores. It is the most suitable option for the people who really want a customization of the cultivation process for yield optimization.

The major advantage associated with the growth of golden teacher mushroom using spores is it saves money (cost-effective technique). Moreover, you can maximize your yield by optimizing the conditions.

If you are planning to grow golden teacher shrooms, you must be well aware of the ingredients required for their proper growth.

You need special equipment for their growth as given below.

Here I am providing you the necessary ingredients to grow golden teacher mushroom.

The surgical mask, sterilized latex gloves, and glove box or still air are optional things whereas all others are necessary.

You should always keep in mind the following instructions.

Though you do not need a lot of space but your environment should be as clean as possible. You must spray sanitizer, brush your teeth, take a bath, wear clean clothes, disinfect your surfaces and equipment carefully.

This phase consists of multiple steps including preparing jars and substrate, filling jars, steam sterilize, and cooling. I have explained all these steps below to have a better understanding.

You can also use a pressure cooker for this purpose. It will take around one hour at 15 PSI.

This phase has also two different steps e.g., sanitizing and preparing syringes and injection of spores. I’ve mentioned the details below.

The steps included in this phase are waiting for mycelium to develop and consolidate.

Waiting for Mycelium to Develop

Place the inoculated jars in some clean space and avoid them exposing directly to the sun.
After one or two weeks, the mycelium will start appearing. It will look like a white fluffy thing and will spread outward.

After waiting for about a month you can have around six jars colonized successfully if everything goes well.

Leave them for another week so that the mycelium can strengthen its hold over the substrate made in step 1.

Making a shotgun fruiting chamber and adding perlite are two different steps involved in this phase of growing golden teacher mushroom. Their details are given below.

The shotgun fruiting chamber is not even closer to the best method but it gives quicker results due to which fresh growers like this technique.

This stage consists of the birthing of the colonized substrates, dunking and rolling the cakes, transferring to grow chambers, and optimizing as well as monitoring conditions. Let’s take a look at all of them.

This phase consists of waiting and picking the fruits. It is considered as one of the most important stages of growing golden teacher mushroom because if everything goes fine, you can maximize your yield thereby increasing your profit. I have mentioned the details below, let’s have a deeper look at those.

What is the Best Time to Harvest Golden Teachers?

The best and recommended time for harvesting golden teach shrooms is to harvest them before their veil breaks. At the time, they consist of covered gills as well as light caps having conical shapes.

How Long Will it take to Grow Shrooms at Home?

According to recent research studies, it may take up to 30 to 60 days to grow your golden teacher mushrooms at home.

A study was carried out in January 2011. It was known as “Pilot Study of Psilocybin Treatment for Anxiety in Patients with Advanced-Stage Cancer”. It had shown tremendous outcomes while treating various patients with anxiety.

When you go and search to find the biggest disease from which most the young, as well as old people, are suffering across the globe. You will find depression and anxiety at the top. So, they have become more popular to treat patients with anxiety. If you want to read in detail, you can click here.

Now, I’m sure that your guys are well aware of the facts associated with golden teacher mushrooms. I’ve tried my level best to cover most of the things that you need to know about these fungi. Click here to read how to dry Mushrooms.

Here, it’s all from today’s article on Golden Teacher Mushroom. Hope you have really enjoyed the content I produced for you. For more such informational content, stay tuned to our platform. I’ll be back very soon.

For now, take care and stay blessed.
Thank You!